There are two words that I don’t think describe me – impulsive and spontaneous. I like a plan. I like to know what lies ahead of me. Before I get out of bed, I’m planning my day. I’m writing articles and emails in my head and making lists. Don’t get me wrong, I like to leave some things to chance, but within a framework of a plan.

Over the years I’ve tried to be more spontaneous, just letting the day take me wherever. On occasion my husband and I have headed out with no particular place to go. Those have always been fun and interesting trips, but not without some consternation on my part about where we’re going to sleep when we get there!

I admit I have made some impulsive buying decisions. That pair of boots in the top of my closet with heels much too high for me to wear – but oh, so cute! Those low rise jeans that looked good in the store, but at home reality is my muffin top looked more like an exploded popover. See, I’m not totally without some spontaneity.

There is an “inside me”… a me that longs for adventure without control, a me that likes to say “in a heartbeat.” And not long ago that “inside me” me took control and the result was a spontaneous, impulsive trip to Charleston, SC.

Here’s how it went down – A friend had planned the trip with two others months in advance. The night before they were to leave she mentioned that she wished she knew someone else who could go because they had room for another person. To which I replied, “Oh, I wish I had known, I would have loved to go.” My friend said, “You would have?” I spontaneously exclaimed, “In a heartbeat!”

The next thing I knew I had bought a plane ticket to leave the next morning at 8 am, had packed a suitcase, and called my boss to tell him I would be gone for a week. All of this within 2 hours! All night I kept telling my husband, “I can’t believe I just did this! I don’t do things like this! I don’t have a plan!” I told him the next time I was being impulsive, to please be the voice of reason. He just smiled and said, “Have a good time!”

When I told my adventurous, live-on-the-edge son about my impulsive decision and how this was “so, not like me,” his reply was, “It is so you! And the word is spontaneous, not impulsive.”

Spontaneous! Such a better word than impulsive. Impulsive is a sudden urge or feeling not governed by reason. A definition of spontaneous is, “Arising from a natural inclination or impulse, said or done without having been planned or written in advance; coming or resulting from a natural impulse or tendency; without effort or premeditation; natural and unconstrained; unplanned.” Doesn’t that sound so much better than “not being governed by reason”?

So maybe, spontaneous does describe me. So maybe, I’ll let the “inside me” come out to play more. Then again…I wonder if there is such a thing as planned spontaneity?

Only in Christ can we be who we were truly meant to be.

I love the quaint cobblestone streets of Old Town in Charleston. 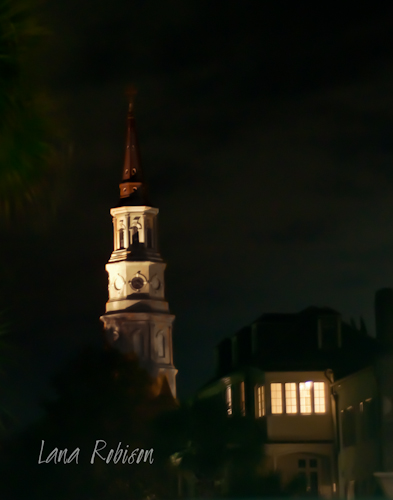 The lights at night in Old Town Charleston give the city a romantic ambiance. 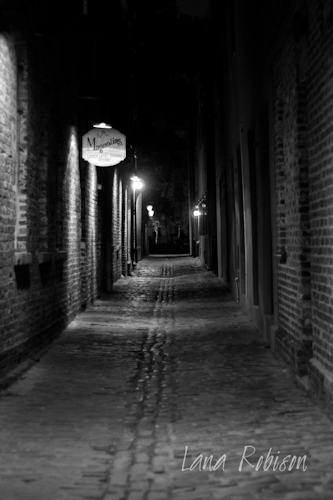 I was hoping to get some street photography, but there were mostly tourists like me who were taking photos themselves.