A Soup By Any Other Name Would Taste As Good…

This recipe is so easy to make and so delicious! Like most of my recipes you can change it up and it’s still the best thing ever. The original recipe calls for corn, but I didn’t have any on hand, so I left it out. It also says to cook for several hours, but who has time for that these days! I cooked mine in less than 30 minutes. It was so-o-o warm and tasty on a cold winter’s night! 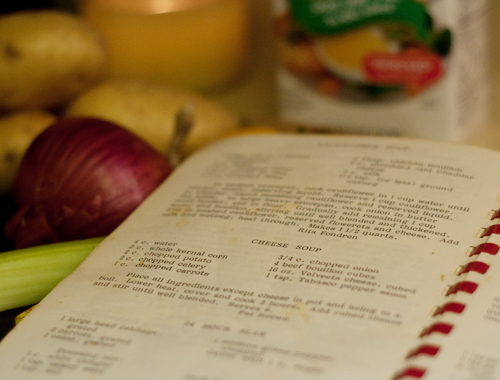 I have several old cookbooks that the ladies of my church published many, many years ago. I still go back to them for those tried and true recipes that I remember savoring at potluck dinners. This recipe is for Cheese Soup and is one my family’s favorite. It’s from one of the best cooks at our church who happens to be one of my best friends. Whenever I have a question about recipes, kids, or life in general, I can always call her and get sound advice or just a listening ear.

Since I tend to use whatever I have on hand, I substituted a yellow onion for a red one that I had in the fridge. I found two small sweet peppers in the vegetable drawer so I cut them up and added them to the veggie mix.

You can cut the veggies into small pieces like I did or make the soup more country style by cutting the vegetables into bigger chunks. To hurry the soup along, I sauted the cut up veggies until tender and then added the other ingredients instead of cooking everything for several hours. 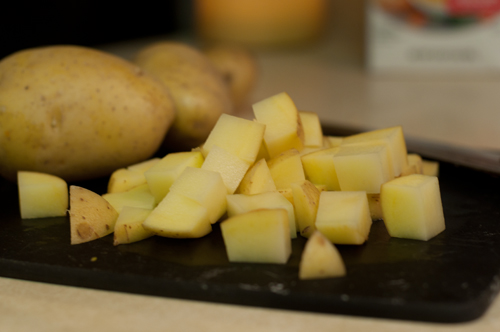 I cut the potatoes into small pieces so they would cook faster. These were pretty Yukon gold potatoes so I left the skin on for more nutritional value.

The recipe calls for water with bouillon as the liquid, but I had a box of chicken broth in the fridge, so I used it and made up the difference in water and chicken bouillon.

One of my most favorite mini appliances is this immersion blender. After the potatoes were soft, I placed the hand blender in the pot of soup and pureed away – but not too much. You want to eave some chunks of potato. This makes the soup a little thicker which my family likes. If you don’t have an immersion blender, you can leave this part out and the soup is still yummy! 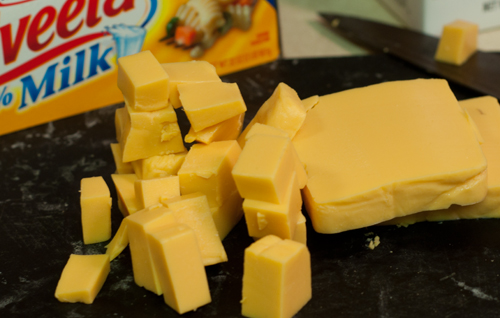 Using Velveeta makes the soup cheesy and creamy, but you could use whatever cheese you have on hand. Just cut it into small pieces, add to the potato mixture, and melt.

Tips & Tricks: Don’t let the soup boil after you add the cheese, it could curdle on you – I know. Turn the soup on low and let the cheese melt as you stir it.

Top the steaming bowl of soup with bacon pieces and serve with hot, buttered cornbread or toast! M-m-m good!

Place all ingredients except cheese in pot and bring to a boil. Lower heat, cover and cook for 2 hours. Add cubed cheese and stir until well blended. Serves 6 (original recipe from Pat Brown)